The new release is part of the Desk Tape Series by the Australian Road Crew Association, (ARCA). All proceeds go to SUPPORT ACT, to support the mental and physical well-being of roadies who have fallen on hard times.

You can DOWNLOAD/STREAM HERE

I try to cast my mind back through the fog to remember the circumstances of that time, that era.

It’s a long time ago but Goanna was on the verge of releasing the second album, Oceania.

Bill Payne, the keyboard player and songwriter was our Producer and it was his first job as such. Along with Lowell George, Bill was a founding member of the legendary American band, Little Feat, known and loved around the world as, ‘a band’s band’, revered for their outstanding musicianship and the sonic quality of the recordings they made.

I’d just returned from Los Angeles where we’d finalised the Oceania album mixes and we were about to Master and ‘cut’ the album for vinyl with the Australian Druid of audio, Don Bartley, at Studios 301 in Sydney.

Having been off the road for nearly a year, recording and mixing, finances were grim and we’d taken to the road with some urgency, to raise some much needed wages, promote the Common Ground single and prepare for the upcoming album release.

By the time we did the Canberra Workers Club gig we’d already been touring pretty solidly through November, December and January 1984, to promote Common Ground.

We’d had a short break before driving to Canberra for one of the first shows in a very long tour run that would take us from Melbourne to North Queensland, to Tasmania and West Australia. Like all touring in those days, it was nearly all done by road.

This is a desk tape, a cassette of the live mix, recorded by the band’s Front of House audio engineer, the very capable and talented Mike Emerson. They were, first and foremost, live mixes done for a live audience and the band would listen back to the live tape on the drive to the next gig the following day, in an effort to constantly improve the live shows. They weren’t made for commercial release.

Mike's a great audio engineer. Mixing a band live was a completely different reality to mixing a band in the studio. Studio recording was ultra-­­­­­organised and controlled. Live mixing was much more random and spontaneous.

There’s some rough patches here and there and a bit of patchwork and spot welding that had to be done in the mastering and editing in a few spots. They’re certainly imperfect but they’re live and real. Somewhere in the middle of two of the tracks the tape suddenly went completely blank for just a few seconds and the missing segment had to be reproduced from another live tape from around the same time.

You’ll also hear bottom end distortion at the end of a few tracks where bass notes, played on a keyboard, break through the compressors. If the musicians turned up on stage, there was only so much the front of house audio engineer could do to control the gain imbalance.

Some of the tracks were cut off at the start or the finish while others were damaged in one way or another and were unusable and never made it. These tapes are also over 35 years old and have sat in boxes and drawers for all that time.

That said, the tapes are impressive and I think you’ll be struck, dear listener, like I was, by how good a live band Goanna were and how great the crew were who pulled these shows together, night after night, on the road. These recordings are a faithful portrait of a band in full flight, with a six man road crew, that you don’t see in the background, pulling every show together. 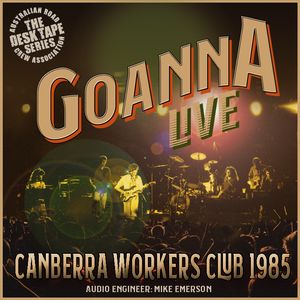